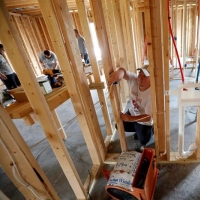 Home renovations with the best financial, emotional return for owners

Dream kitchens and luxurious bathrooms are often the go-to renovations for homeowners looking for the best return on investment, but experts suggest the biggest bang for their buck might be as simple as replacing a garage door.

Renovations in Canada are big business, with Canadians spending about $6.3 billion on residential renovations in August 2019 alone, up from roughly $5.8 billion in the same month the previous year, according to Statistic Canada.

Some projects offer more of an emotional return than financial, according to a report from the Appraisal Institute of Canada. Finishing a basement, adding a garage, building sun rooms, decks or landscaping a yard offer some of the highest enjoyment value.

"When you're doing renovations, some of them have a different impact and it's not always about value," said Dan Brewer, a senior appraiser and former national AIC president.

People often choose to spend tens of thousands — if not more — on renovating a basement to give themselves additional living space, a better play area for kids or a space for extended family to stay when visiting, said Brewer.

But it also offers "a double-edge benefit," he said, as buyers tend to pay a little more for homes with finished basements than those without.

Kitchens and bathrooms, on the other hand, often don't boost the sale price by the cost of the renovation, said Aunger.

"I always say to people, 'If you're going to do a renovation of your kitchen and you're thinking of selling two years from now: do it now, so you at least enjoyed it for the two years.'"

Some additions can dissuade buyers or push them to make a lower offer.

Think hyper-personalized design choices such as bright, not-neutral paint colours, like orange, said Aunger, or less-common features that can be expensive to maintain like wine cellars, saunas, hot tubs or swimming pools.

"If you had two houses, side-by-side and they're identical houses but one has a pool and one doesn't," she said, "it doesn't mean the buyer will pay $20,000 more for your pool."

Exterior renovations tend to have the highest rate of return each year, said Clayton DeKorne, chief editor of construction focused JLC Group. One of its magazines publishes an annual report estimating the cost versus value of more than 20 common renovation projects. Their data relies on project estimating software and an online survey of more than 4,600 real estate professionals.

According to the 2019 report, an upscale garage door topped the jobs with the best return on investment, with an average price tag of US$3,611 and a return of $3,520, recouping 97.5 per cent of the cost.

The latest report found that only one of the top 10 projects with the highest percentage of cost recouped was inside the house — a mid-range, minor kitchen remodel. The other nine included replaced siding and windows, as well as deck additions.

DeKorne believes that trend comes down to curb appeal for potential buyers.

"People who are looking at houses tend to have a psychological connection," he said.

This report by The Canadian Press was first published Oct. 24, 2019.